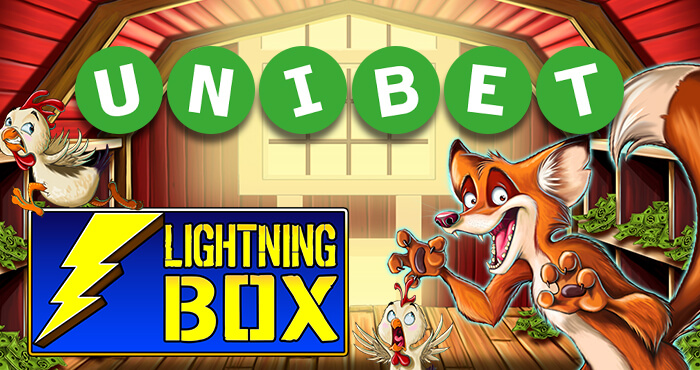 The 3×5 reel slot, staged inside a cash-strewn hen house, features every farmer’s worst nightmare – a fox among the fowl.

With members of the yard filling the reels, from a wise old goat to the apple-pie cooking farmer’s wife, Chicken Fox’s jovial setting has a dark twist at its heart.

The great new game is now live on an exclusive basis with Kindred Group brand Unibet, before general European release across the Sydney-based supplier’s network of operator partners on 20th February.

Peter Causley, CEO and co-founder of Lightning Box, said: “We’re thrilled to release our latest title, Chicken Fox, which should cause a bit of a flap. Its comically dark theme will have players chasing chickens up and down the reels.

“It’s fun features and easy gameplay are what they have come to expect from Lightning Box, and we’re eager to hear their feedback from our latest creation.”

Chicken Fox’s bonus feature is based on a fox catching chickens that can award up to 66x per symbol. The wily critter can also catch eggs that can add further free games, causing massive wins.

David Robertson, Head of Casino at Unibet, said: “We’re very excited about getting our hands on Chicken Fox first and hope it will be a great performer for us like the rest of Lightning Box’s portfolio.”