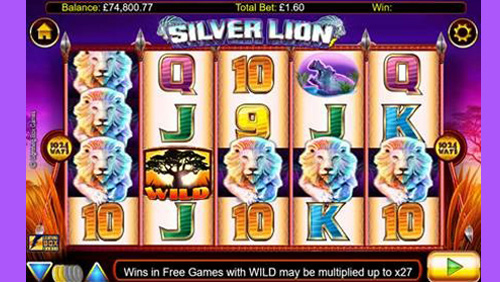 The 5×4-reel, 1024 ways slot takes players on safari across the sweeping plains of the African Savannah in search of the mythical Silver Lion.

Along the way they encounter zebras, hippos, meerkats and spear-rattling tribesmen, but when the Silver Lion appears through the undergrowth, players can expect bonus rounds and huge wins.

The game has been designed and built in premium HTML5 for desktop and standard HTML5 for mobile, and comes with stunning graphics and an authentic soundtrack that transports players to the heart of the wilderness.

It is currently available exclusively to players on LeoVegas.com, before going to general release on 7th December.

Peter Causley, Lightning Box managing director and co-founder, said: “Silver Lion is a beautiful game offering players big prizes by multiplying their stacked wins by up to 27 times. The math model behind the game ensures players are engaged and entertained in equal measure.

“It is a great addition to our growing portfolio, and is the result of months of hard work from everyone here at Lightning Box. We are sure players on LeoVegas will enjoy playing the game as much as we did making it.”

Karolina Pelc, Head of Casino at LeoVegas, said: “We’re very pleased to once again deliver on LeoVegas’ promise of being the first with the latest. We’re confident that Silver Lion will be one of those popular games with all our players.”

Lightning Box Games recently struck a trio of deals with online casino operators in the UK, with its Stellar Jackpots-Chilli Gold x2 title launching simultaneously with bet365, Coral and Ladbrokes.

Lightning Box Games is a leading multi-channel supplier of video slots to the betting and gaming industries. The independent studio, based in Sydney, Australia, provides high quality gaming content to land-based, online, and social casinos around the world. It was founded in 2004 by former Aristocrat and IGT designers Peter Causley and David Little. Their combined forty years’ experience has helped the studio produce a number of commercially successful games, such as Stellar Jackpots-Chilli Goldx2, Dolphin Gold, Dragon Palace, Frogs ‘n Flies, Astro Cat, Silver Lion and Five Pirates. These, and their most recent releases, regularly feature in the top performing games of clients, including NYX and Incredible Technologies. They are also due to go live with Ainsworth and Everi in the near future. For more information about Lightning Box Games. Visit website.

LeoVegas is a world-class mobile game entertainment provider. LeoVegas runs Europe’s fastest and most user-friendly mobile gaming platform offering 700+ casino games, the world’s largest suite of live casino entertainment in HD and the all new sportsbook, labelled as the sporting event of the year. With cutting edge technology, innovative data, and a strong entrepreneurial management, LeoVegas has grown to become the gaming provider of choice for thousands of players. LeoVegas is internationally recognised as a leader in mobile gaming and has won several prestigious industry awards, including EGR’s ‘Slot Operator of the Year 2015’, ‘Marketing Campaign of the Year’, ‘Innovation in Mobile and Tablet’ and others. LeoVegas is listed on Nasdaq First North Premier, under the ticker symbol LEO. LeoVegas employs a team of 300+ talented people in its offices in Malta and Sweden. Visit www.LeoVegasGroup.com/en or www.LeoVegasCareers.com